Notice:   If you are on this page and are not a teacher, please click HERE immediately.  We are trying to find someone who has an Ahrimanic understanding of computers to hide this page from parents for us, but until then, you will all be on the honor system.  Thank you for your cooperation.


Hello everyone.  I'm back from vacation.  I just want to say I love the new web page.  Being able to post here will be so helpful and has lifted my spirit - well, I suppose it may just be jet lag.  I look forward to the wisdom I will be receiving from our dedicated teachers.  Has anybody arranged for the parents to paint the second grade classroom yet?


Hi Faith, welcome back.  Not too much going on around here yet.  I was wondering if you and your daughter might like to go with me to the zoo this weekend.


Hi Faith and Bodo.  Glad you two are here.  I wanted to share this with the lower school teachers before classes start.  This is a quote from Our Lord, Rudolf Steiner that may help guide you this year.  The children in your classes will be coming up on their ninth and tenth years soon, and this is the best time to sink the hook, so to speak.

We now can no longer expect to act upon the children purely through fairy tales, or through all kinds of teaching stories in which we animate the outer physical world. So let’s start with the observation that the child distinguishes itself from the outer world as an “I”.

But something else plays an essential role, which is connected deeply with moral development. The following happens: at the beginning of the stage during which children completely trust authority, they accept this authoritative individual just as he or she is. Between the ninth and the tenth year, something happens—it doesn’t have to be conscious, it may happen deep in the realm of feeling, we might say in the subconscious realm, but it is unquestionably there—children find themselves, so to say, forced by their development to look through the authoritative person to what it is that that person represents.

Lighting a candle for the new school year.


Rudi, how is the search for the new first grade teacher going?


Not so good Jane.  Here's what one of the applicants produced during her interview. 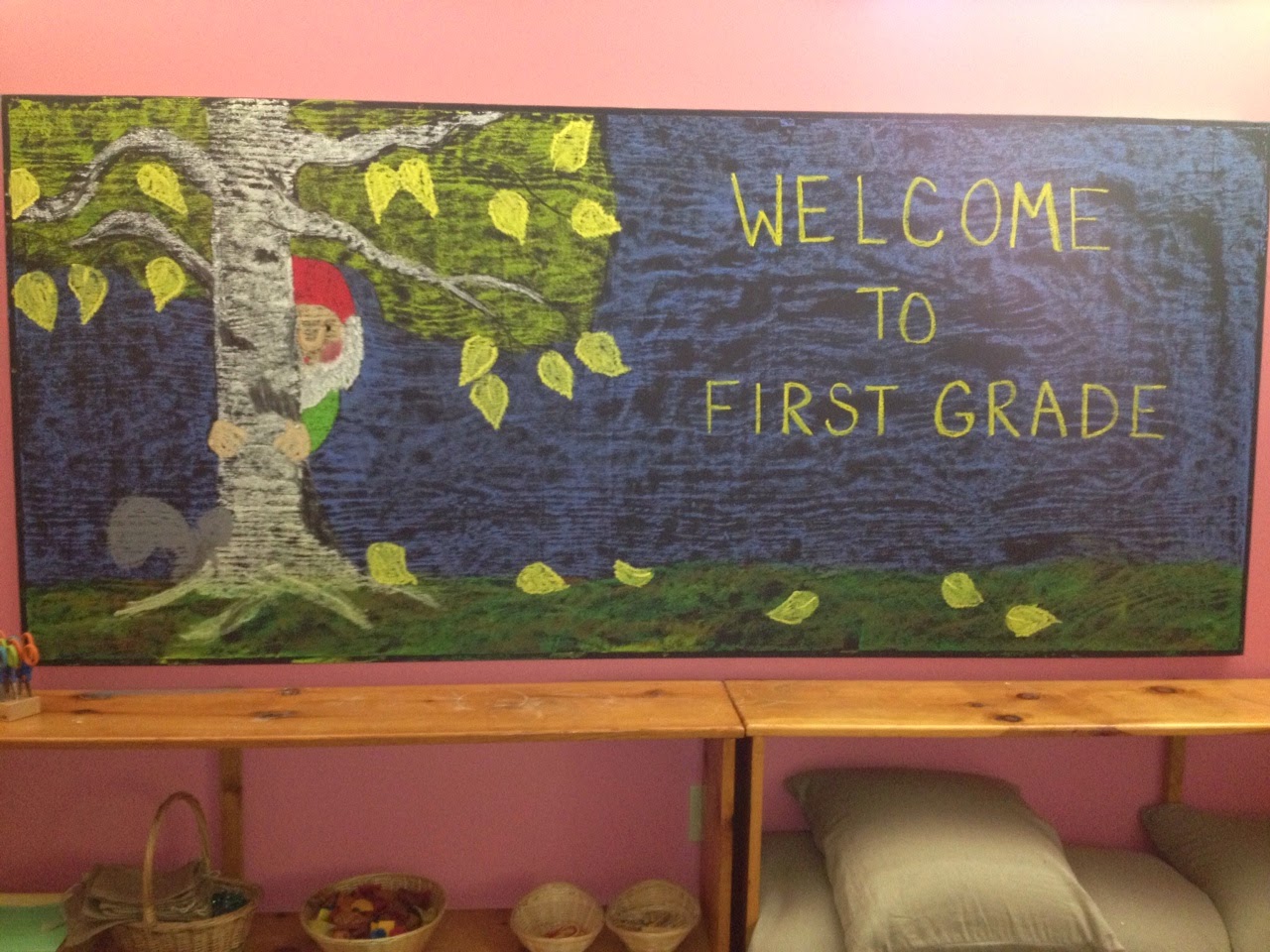 
Oh my goodness.  This is like one of those "How many things can you find wrong with this picture" puzzles.  He's wearing all the wrong colors, and the colors are just smudged on instead of neatly hatched.  And what is that squirrel doing?  Is that why he's supporting wood? LOL!


Actually, what I was trying to show you is the writing.  Does the teacher actually expect first graders to be able to read?  Maybe she should photograph it and give it to them when they get to fourth grade.  LOL.

That reminds me, I received an application for a handwork assistant.  I think we should consider her for the first grade teacher position for now.


Hello everyone - it looks like I'm stuck here painting the classroom today.  Thank you Bodo, for taking my daughter to the zoo today.

I tried to arrange for volunteers to come paint the classroom.  So far it's just one other parent and me.  We're trying to mix the paints but not sure how to do it.  Do we stir clockwise, or counterclockwise?  I'm so confused.  Oh, and is 2% milk OK to use for the paint?


Hello Faith.  No, 2% milk is not OK.  You must get "raw" milk.  I'd suggest trying to get some from Peter at our biodynamic farm, but I understand almost all the cows have already been turned into compost this year - so he may not have enough milk on his hands.  Oh, and I'm sure he will advise you to stir your paint in a figure 8.  Good luck today.


Great news!  I've been in contact with the Quintessence of the Loon Waldorf school in Sweden.  We may be able to get Eva Narwhal here on a religious visa to teach the first grade. Sometimes, claiming to be a "religious" school comes in handy!


That IS great news Jane.  How long will her visa be for?


Who cares!  We can fill the spot for now.


I just received Eva's profile picture by email.  We may have to crop it for the website:


I have only just arrived here, but I would like to just point out the untruthfulness of Waldorf critics.  They haven't studied Our Lord, Rudolf Steiner, as deeply as I have.  They don't take things as serious as I do.  They have taken hundreds of quotes out of context to try to make Him sound like a racist.  For more about the myths critics make up, see RudolfWaldorfAnswers.com.


Has anyone ordered roses for the rose ceremony?  If it's too late, I have some rose-colored glasses I can pass around.  I only have one pair, but they are very thick.  Meanwhile, I just want to point out the untruthfulness of Waldorf critics.  I know it's only about six people in San Francisco who some describe as a hate group , but it's worth me spending every waking hour pointing out how untruthful they are.  For more about how untruthful they are, see RudolfWaldorfAnswers.com


Whose idea was it to leave the thorns on the roses for the rose ceremony.  We almost ran out of calendula.


That was the idea of our teaching assistant from the Ringwood Waldorf school - Ellen Swindella.  What's wrong with spilling a little blood if it's for a good cause?  We are in the "sacrifice" business, after all.  For more about how untruthful Waldorf critics are, see RudolfWaldorfAnswers.com


Hello everyone.  I just want to remind the grades teachers to collect the handwork fees from the parents.  Yarn doesn't grow on trees you know.  I'm very anxious for the year to get going.  The children, so far, haven't produced much.  I'm having to practice my unraveling on left-over projects from last year.  And, of course, it isn't nearly as satisfying as unraveling two weeks of a child's work in front of the class - to recover a missed stitch.  THAT'S the part I really enjoy - but sometimes parents don't understand!

Today is September 11th.  On this day, thirteen years ago, America watched as her hard work was unraveled before her eyes. Think of how this helped America to become stronger.  This is what I am doing for the child every time I unravel their knitting. Who can deny that watching your work destroyed before your eyes while being humiliated in front of your entire world builds character?


I must say I am shocked at the ill-mannered children at this school.  I thought they understood the meaning of Michaelmas.  Instead, when the child representing St. Michael tried to stab the dragon, the dragon fought back.  The children in the dragon head managed to take St. Michael's sword away from him - and when St. Michael reached into the dragon's mouth to retrieve his sword, they pulled him in. Personally, I blame the Waldorf critics -  see RudolfWaldorfAnswers.com

Email ThisBlogThis!Share to TwitterShare to FacebookShare to Pinterest
Home
Subscribe to: Posts (Atom)
Angels who have watched over us